JPMorgan Chase and its predecessor firms have owned and operated the Corporate Challenge since 1977, creating a proprietary story of fast running times and unmatched camaraderie that resonates with companies large and small in all cultures. Take a journey through the years with us here. 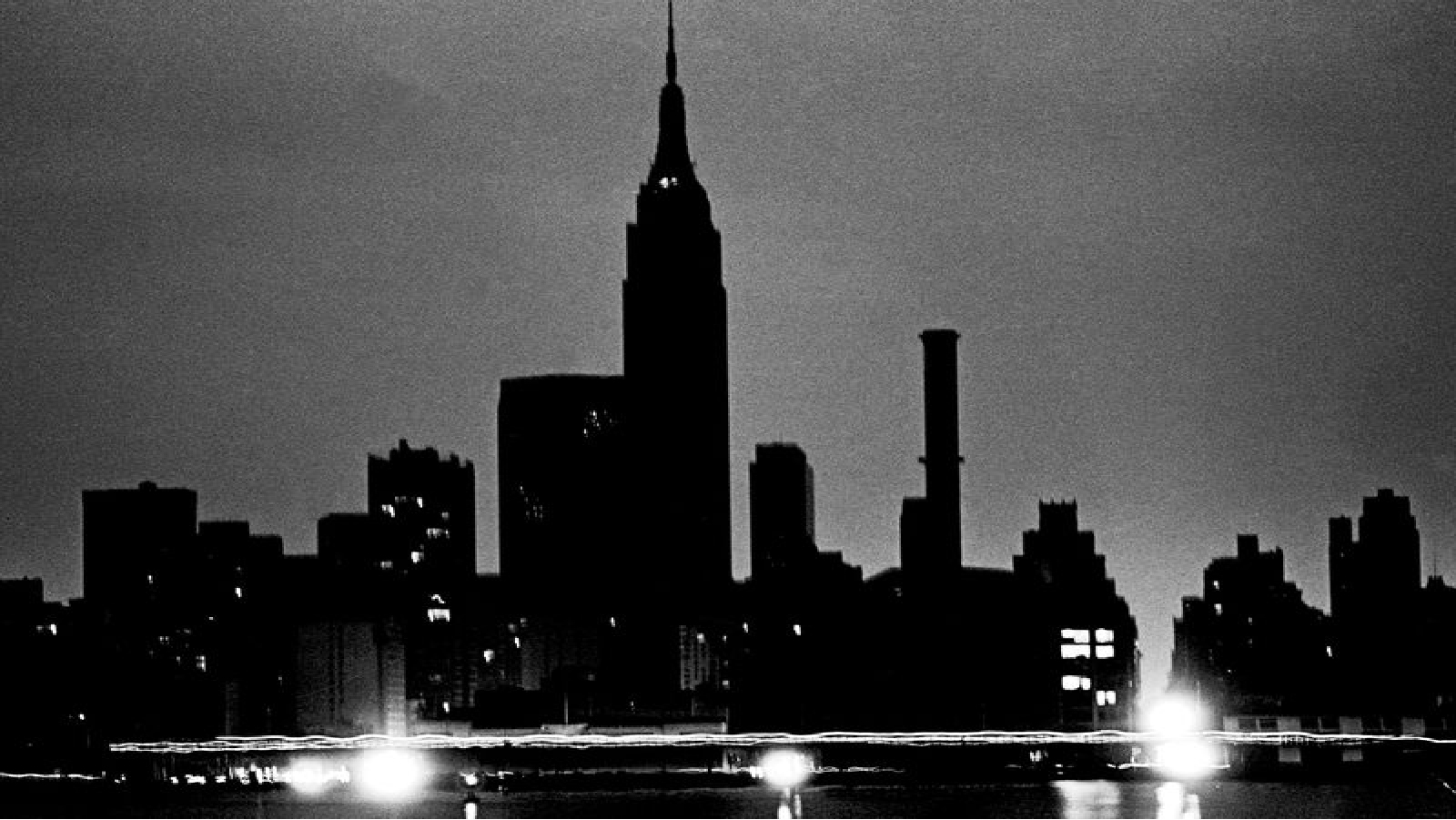 The first Manufacturers Hanover Corporate Challenge was held on July 13, 1977 and attracted 200 participants from 50 companies. Those pioneers in New York’s Central Park had no idea what this event was going to evolve into.

But July 13, 1977 will be long remembered by historians as the night of the New York City Blackout, when all of Manhattan and most of the other boroughs were plunged into darkness following a series of lightning strikes. Power was not restored until the next day.

Manufacturers Hanover – a predecessor firm to JPMorgan Chase – was a founding sponsor of the New York City Marathon. The firm’s management enjoyed the partnership with the Marathon but realized most of its business customers were more likely to participate in a shorter distance running event.

The Corporate Challenge distance settled on was 3.5-miles. Why that length? It was exactly two laps of Central Park’s southern loop, and it was distinctive. Running was growing in popularity and there were 5K races (3.1 miles) most weekends. But the 3.5-mile Corporate Challenge, held on a weeknight in a team format, was unique. 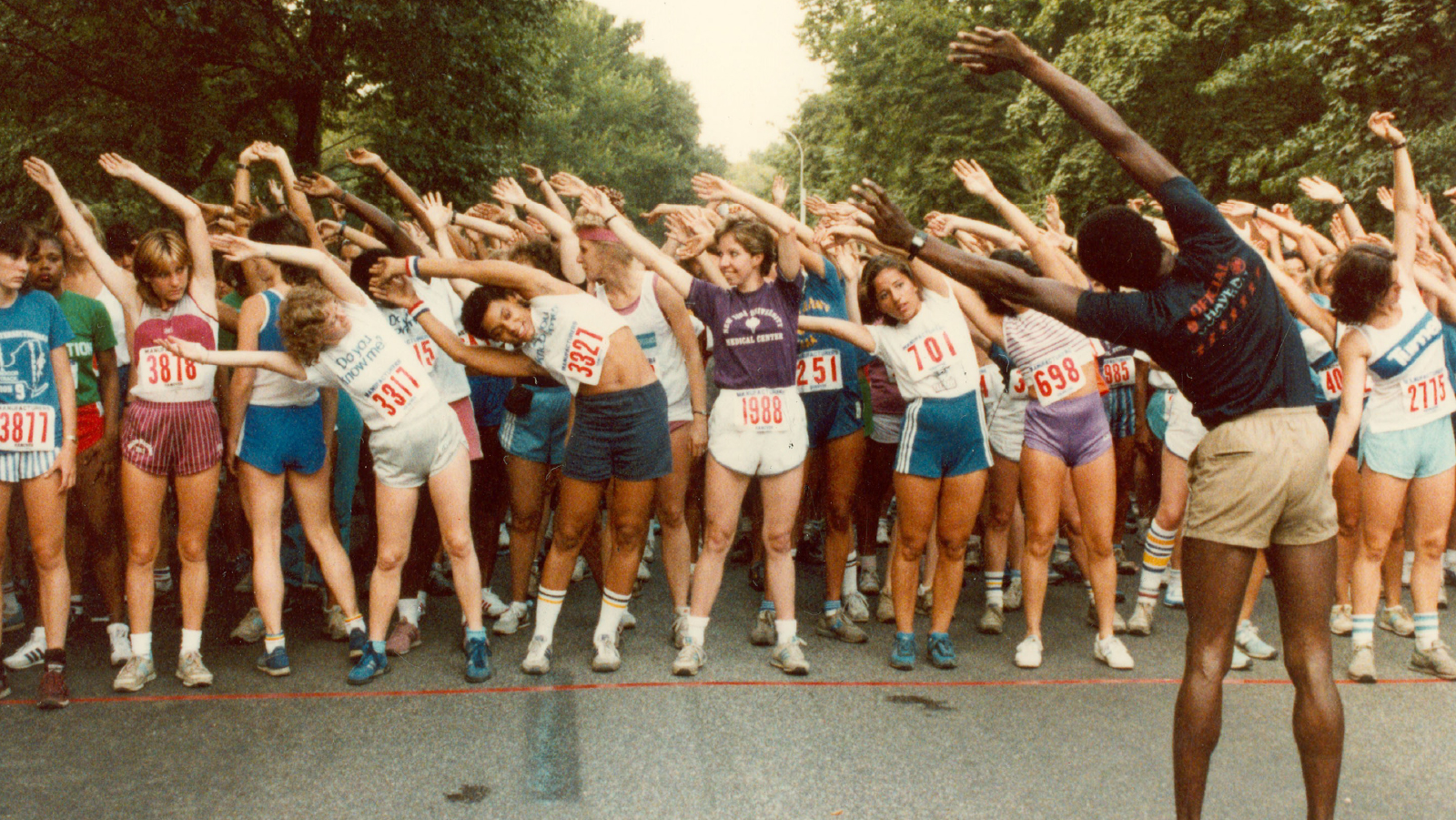 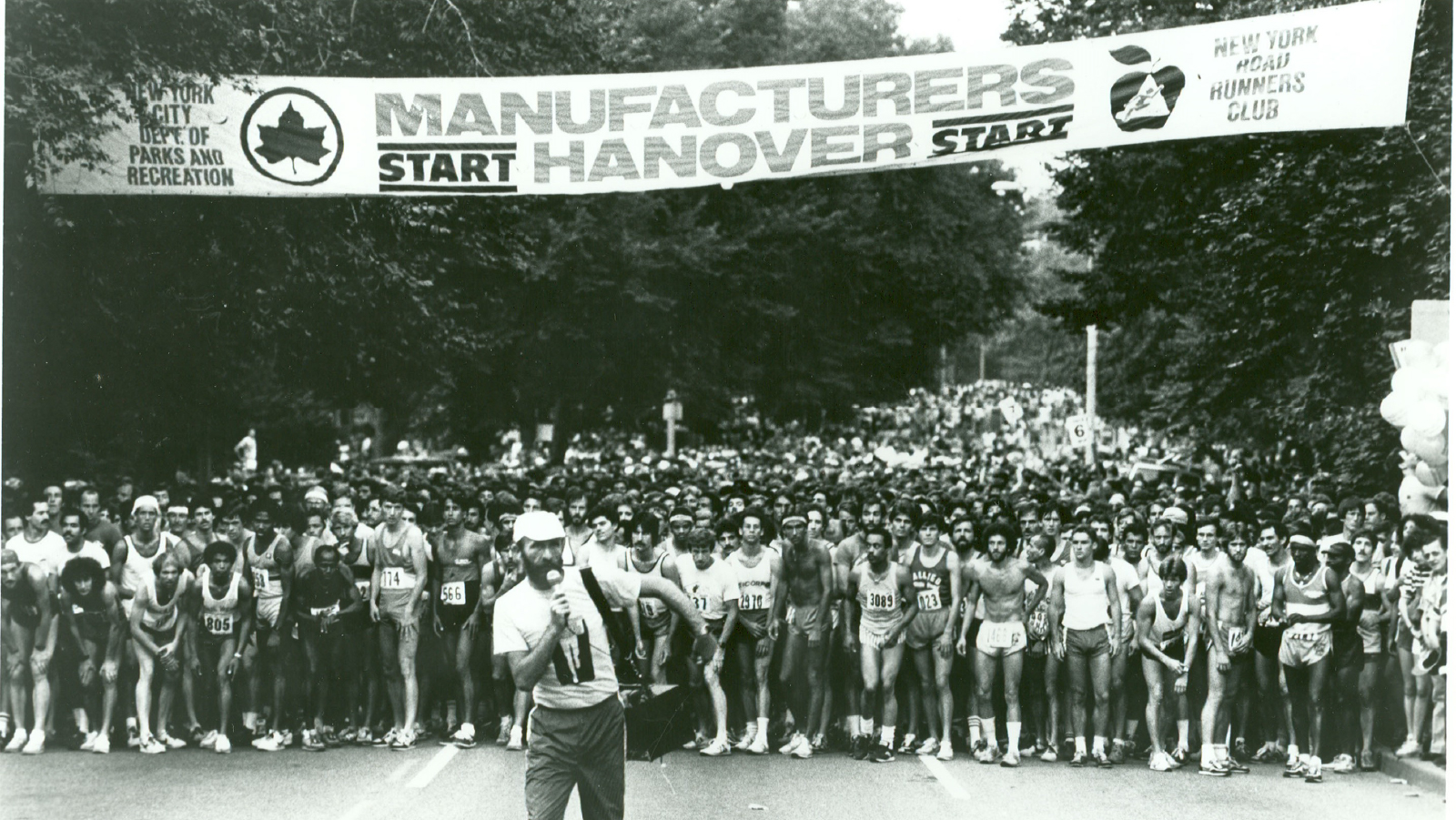 By the third year in Central Park, it was clear the Corporate Challenge was on its way. A total of 2,300 participants from 197 companies registered, 10 times higher than the previous year.

The legendary Fred Lebow – race director for the New York City Marathon – also oversaw race course planning for the Corporate Challenge in Central Park and realized that Manufacturers Hanover was rightly positioned to lead the way in forging connections and cultivating healthy workplace cultures. And it was now time to take this show on the road. 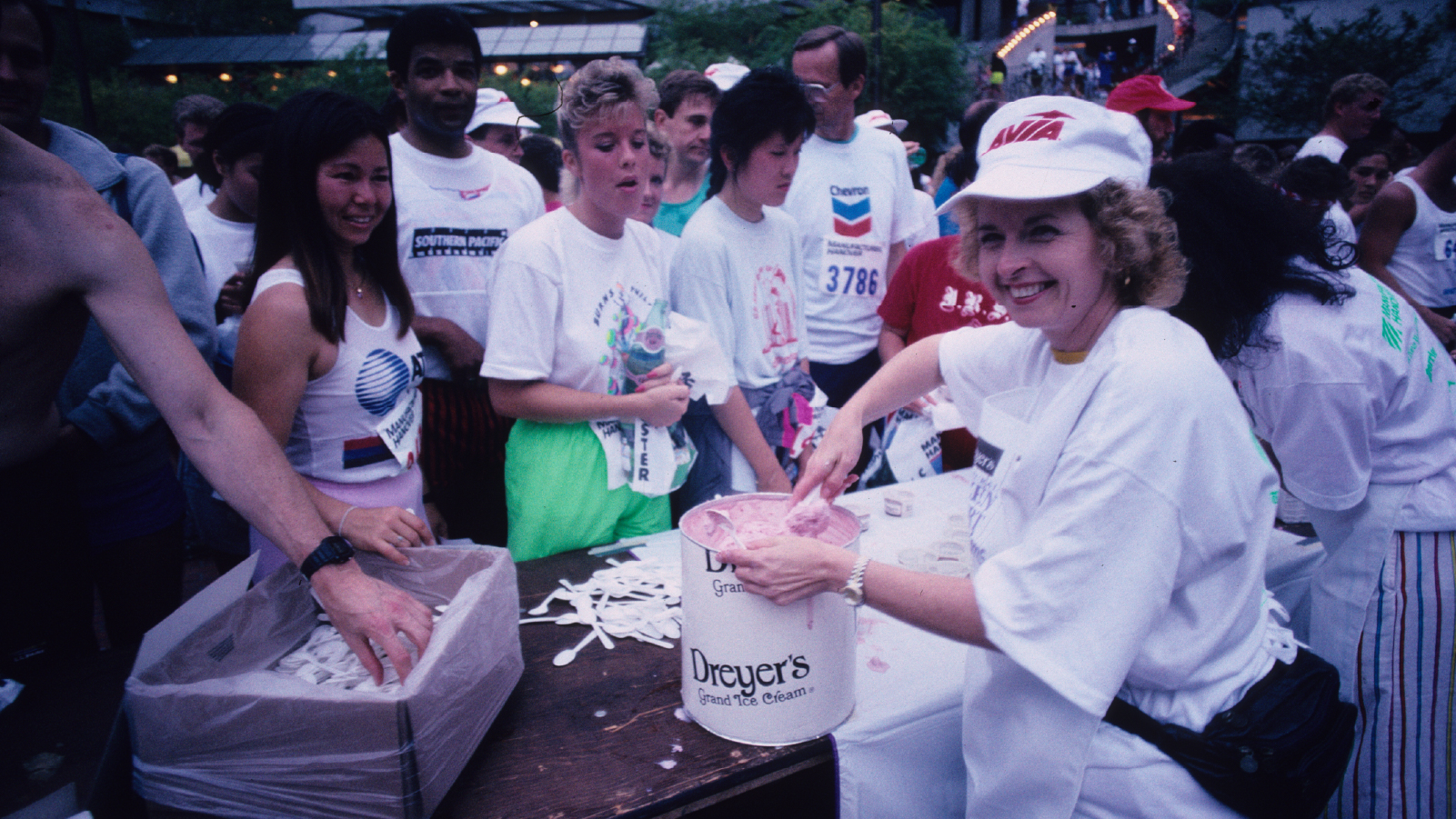 The Corporate Challenge becomes a Series

Expansion ensues, with Albany (1980) and current Corporate Challenge cities Buffalo (1981) and Chicago (1982) being the first three to join in on the fun. The first event on the West Coast of the U.S. was conducted in San Francisco in 1983, attracting 1,300 participants to Justin Herman Plaza with the promise of post-race ice cream.

With coast-to-coast representation in place, the Manufacturers Hanover Corporate Challenge Championship also debuted in 1983, bringing together the first-place men’s, women’s and mixed teams from what was then a 6-city Series. The first Championship race course? It was the infield of the Meadowlands’ harness horse racing track in East Rutherford, New Jersey.

The Championship gets a Park Avenue address

After a year at the Meadowlands, and a logical attempt at hosting The Championship for a road race operated by a financial services firm on Wall Street in 1984, The Championship found its home for the next quarter century at 270 Park Avenue – JPMorgan Chase’s headquarters.

Every year between 1985 and 2008 – with one exception – The Championship was conducted on the first or second Saturday in October, generally with a 9 a.m. starting horn. The course was entirely on Park Avenue, allowing participants to compete on one of the world’s most famous thoroughfares. That one exception to the October scheduling came in 2001, when the 9/11 terrorist attacks forced a postponement to December 1. 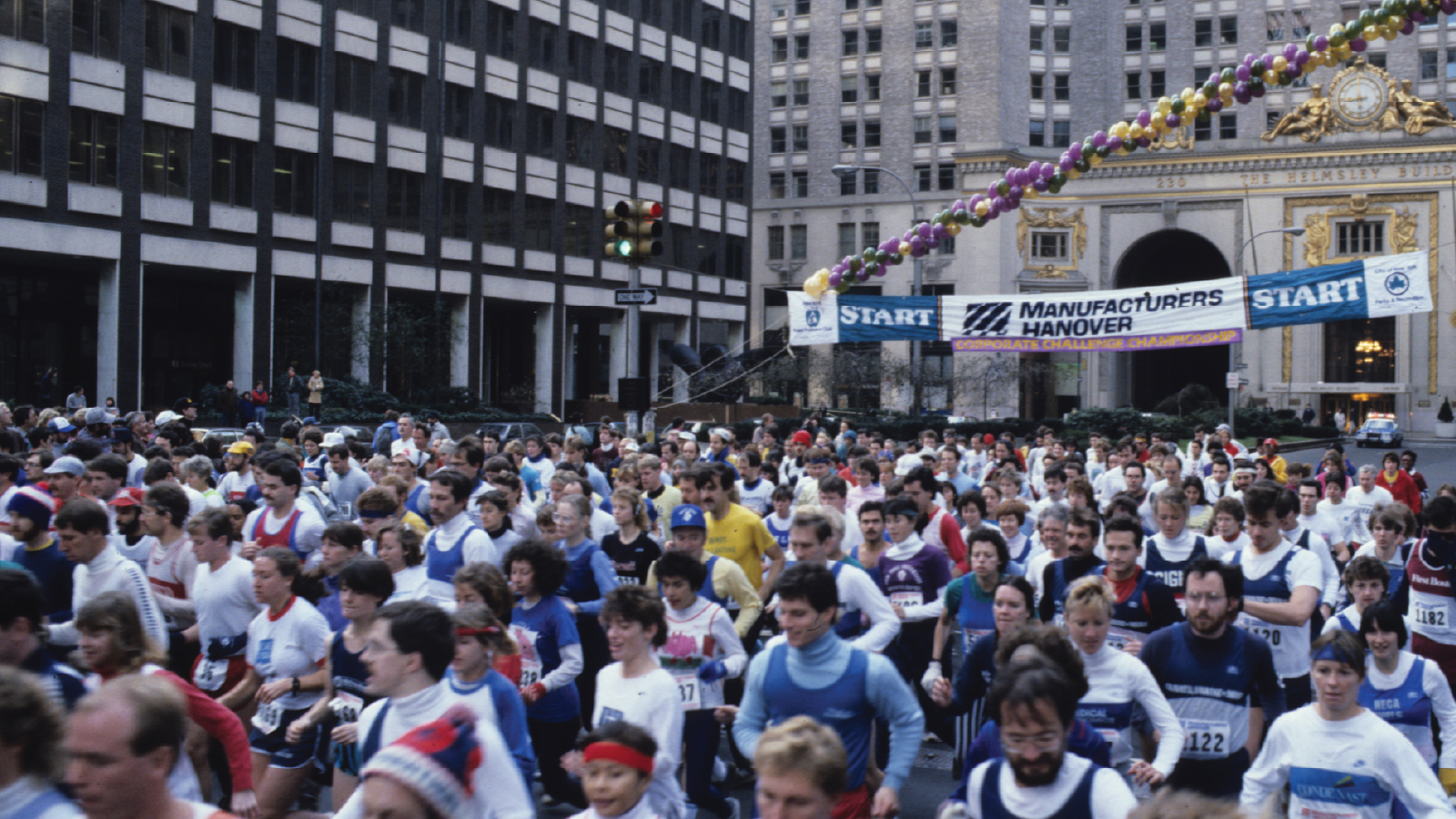 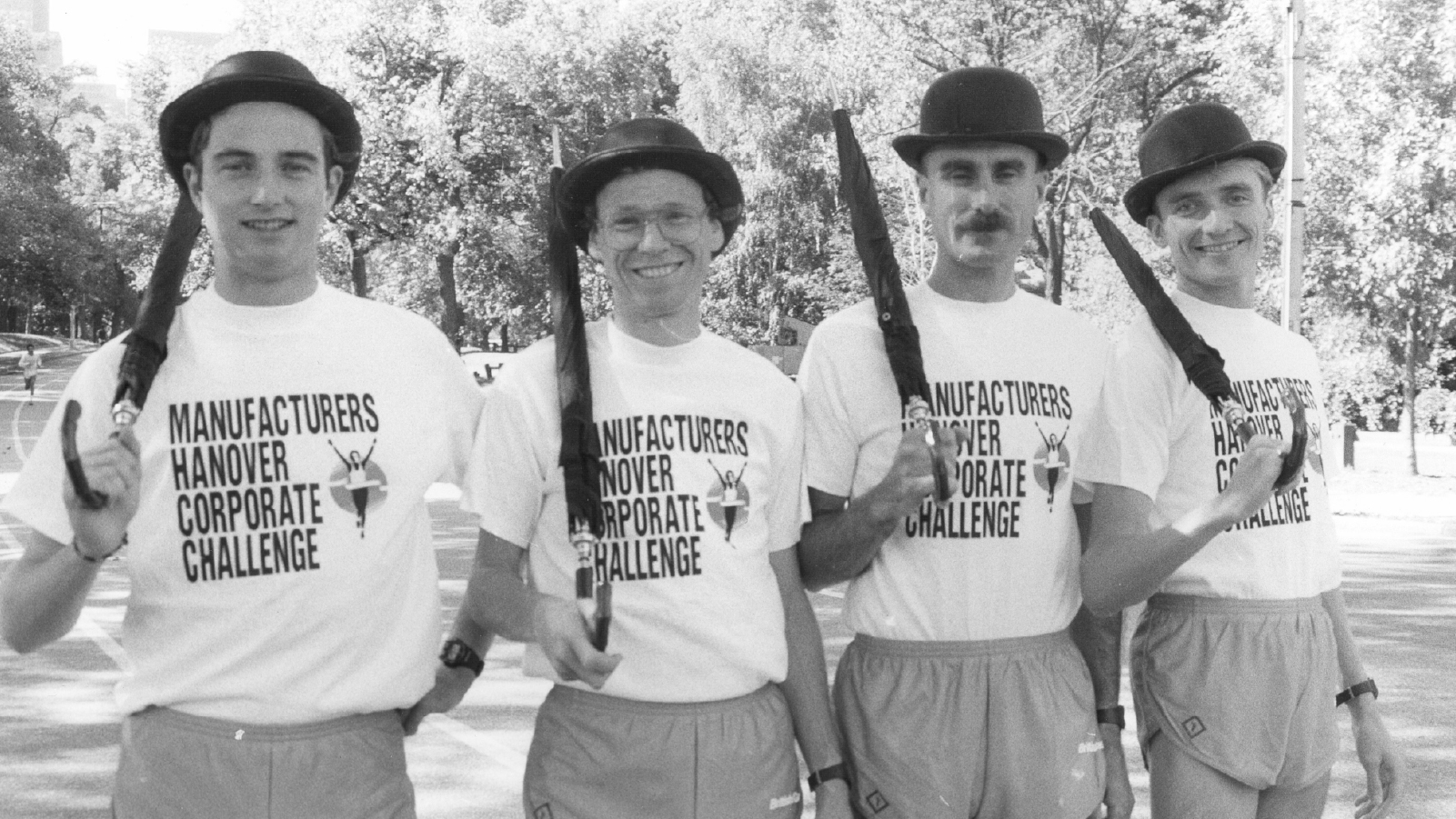 The crown for the longest-running international event in the Corporate Challenge Series appropriately belongs to London. The Series first ventured there in 1986, conducting the 5.6-kilometer race in the city’s financial district, attracting 5,000 participants from 440 companies.

After five years in the city, the Corporate Challenge took a year off in 1991 to retool. It returned in 1992 across the Thames in Battersea Park and became a tremendous success story. Held over two consecutive nights, the races have drawn over 20,000 participants each year since 2000 and have reached full capacity each summer from 2012 to 2019. 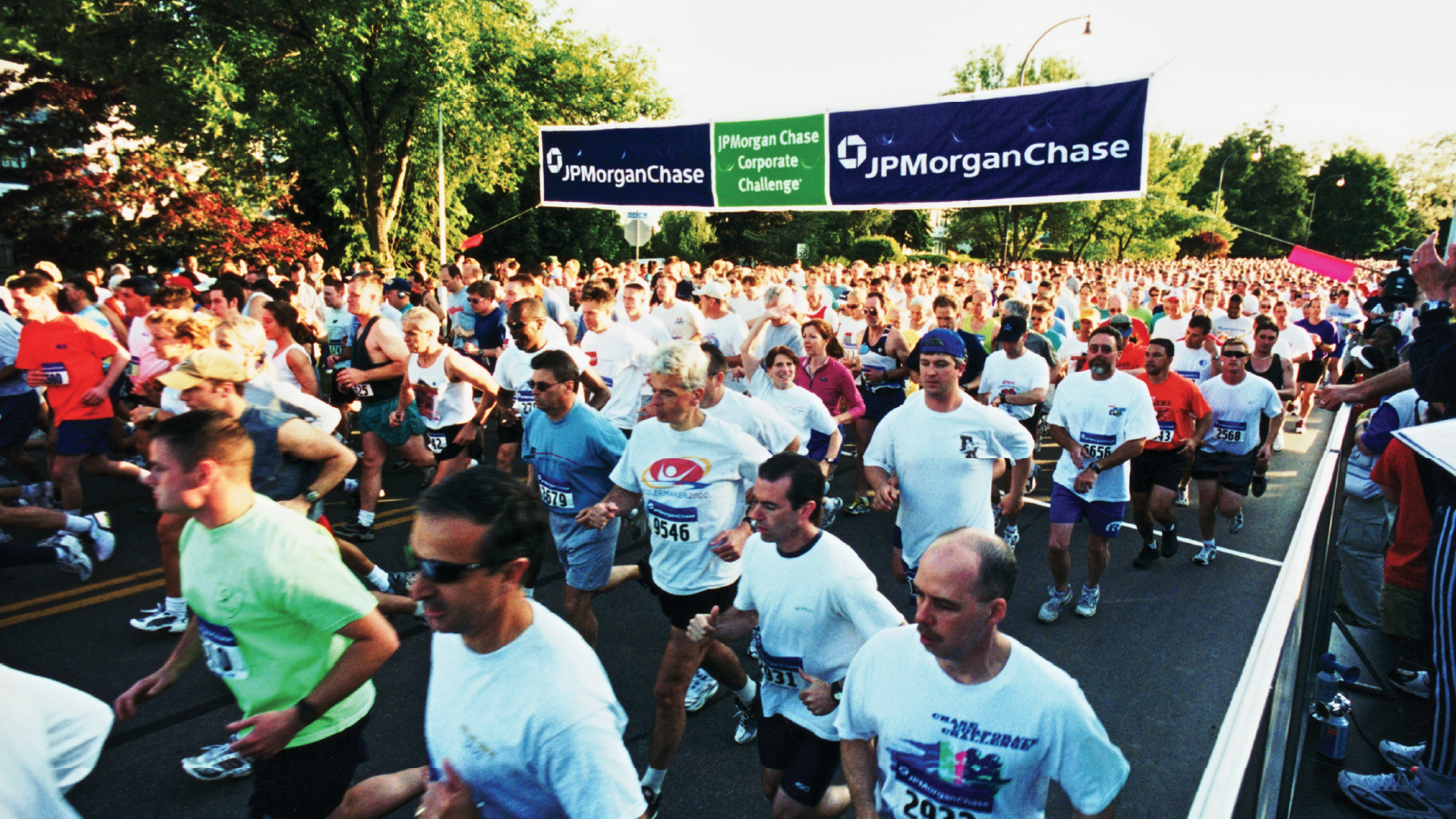 When Rochester joined the Corporate Challenge Series in 1991 it was held as part of the city’s annual Lilac Festival. Three decades later it has bloomed into one of the most successful events in the Series.

Rochester has a population of just over 200,000, the smallest among all Corporate Challenge cities. But through the years the event has really embraced the celebration of team. In 2008, for instance, a city record 11,118 participants entered, making it the largest U.S. per capita (participants to population) event in the history of the Series.

From a river pathway to world’s biggest race

Just 57 companies heeded the call to enter Frankfurt’s very first Corporate Challenge in 1993. The gathering was so small the entire event could be staged in a dirt and grass pathway along the River Main in Germany’s financial capital.

Exactly 15 years later, the entire city was mobilized as a world-record (not just for the Corporate Challenge, but any race of any distance) crowd of 73,719 participants from a staggering 2,598 companies took part. The race remains the largest in the Series with hundreds and hundreds of buses bringing in participants from Berlin, Munich and other major cities throughout Germany. 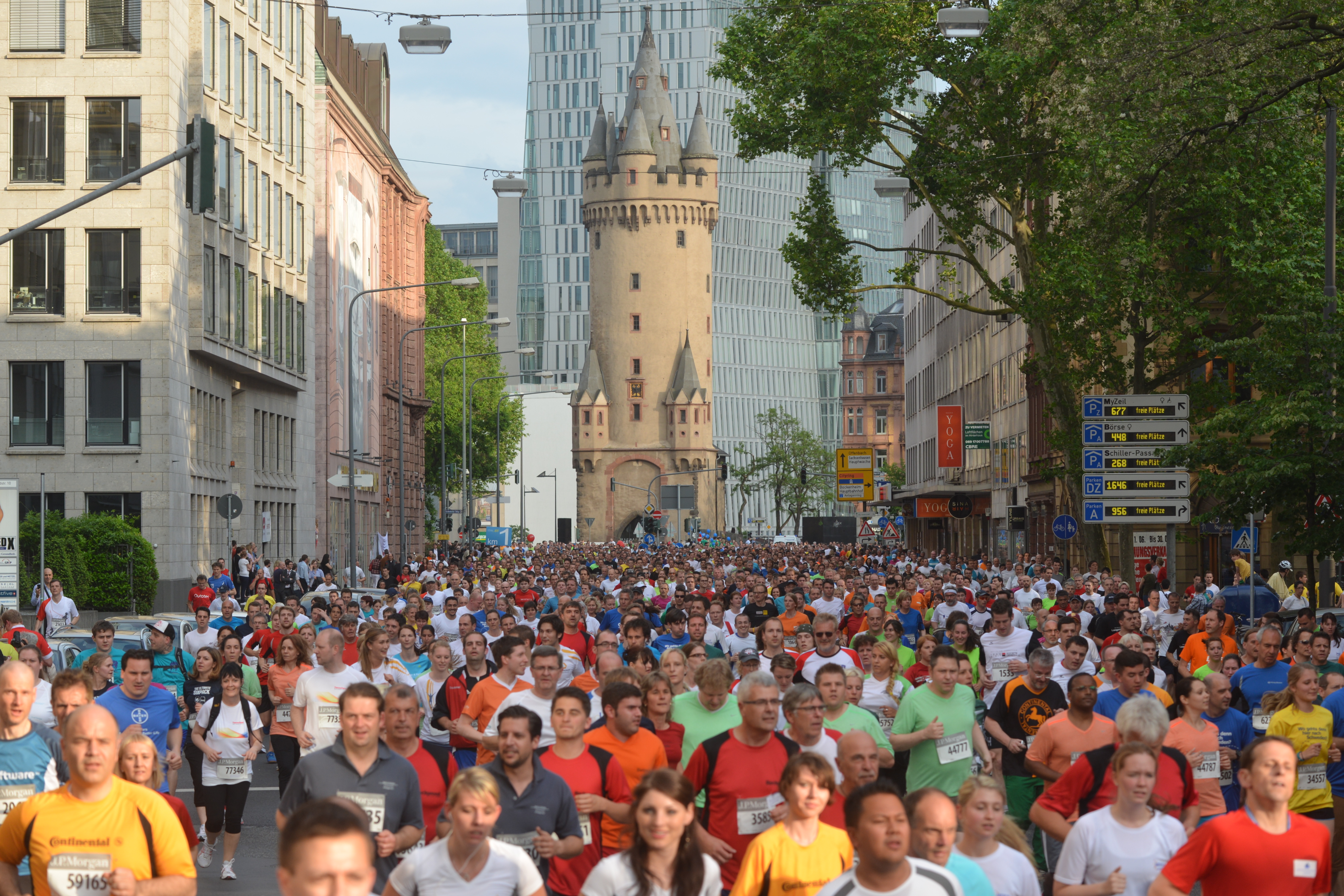 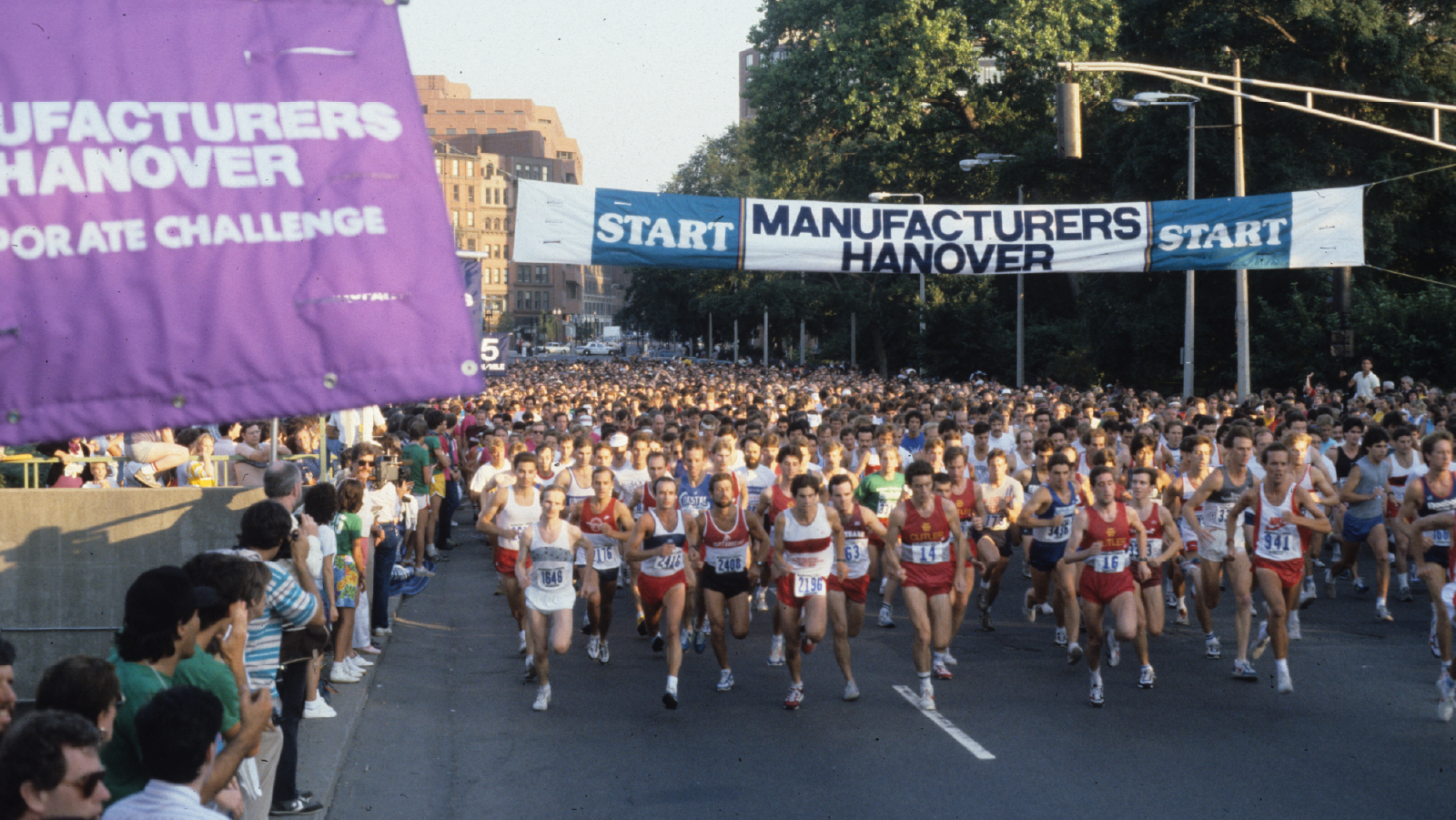 A million runners and walkers

By the mid-90’s, massive crowds (such as this one in Boston) were commonplace, and in 1996 the Series surpassed one million total participants in its history. 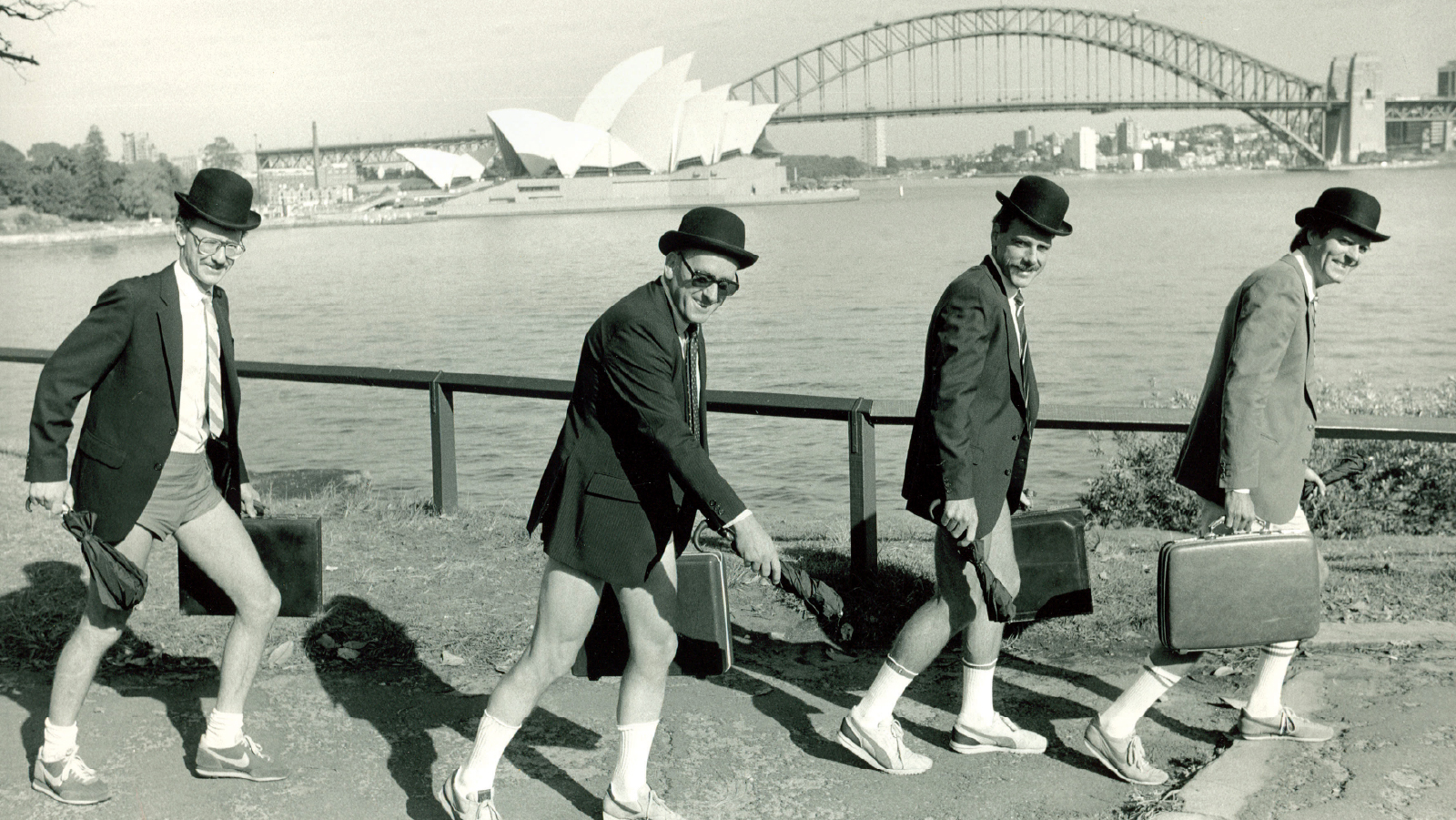 A successful Down Under return

Through its history, the Corporate Challenge has had some global events that didn’t survive the test of time – Stockholm, Dublin, and Oslo, for instance.

Sydney, Australia was a market that was also evaluated in the late 80’s. The timing wasn’t right for the event at the time, but when the Series returned in 2000, the event took off. Held annually at Centennial Park, Sydney has hosted 6,000 or more participants each year since 2005, annually hitting the capacity limit for hospitality spaces.

Singapore brings the Series to Asia

On April 28, 2004, a traditional Lion Dance was performed at the starting line to wish good luck to the participants of the first-ever Corporate Challenge in Asia.

It worked. Nothing but good fortune has been experienced at the event in Singapore. That 2004 crowd numbered 6,766 participants from 261 companies – the largest crowd for any first-year event in Corporate Challenge history. By the 10th running in 2013 the number of participants had grown to 16,719, with the majority of 5.6-kilometer race distance on city streets, showcasing the modern and tropical beauty of this sunny city-state. 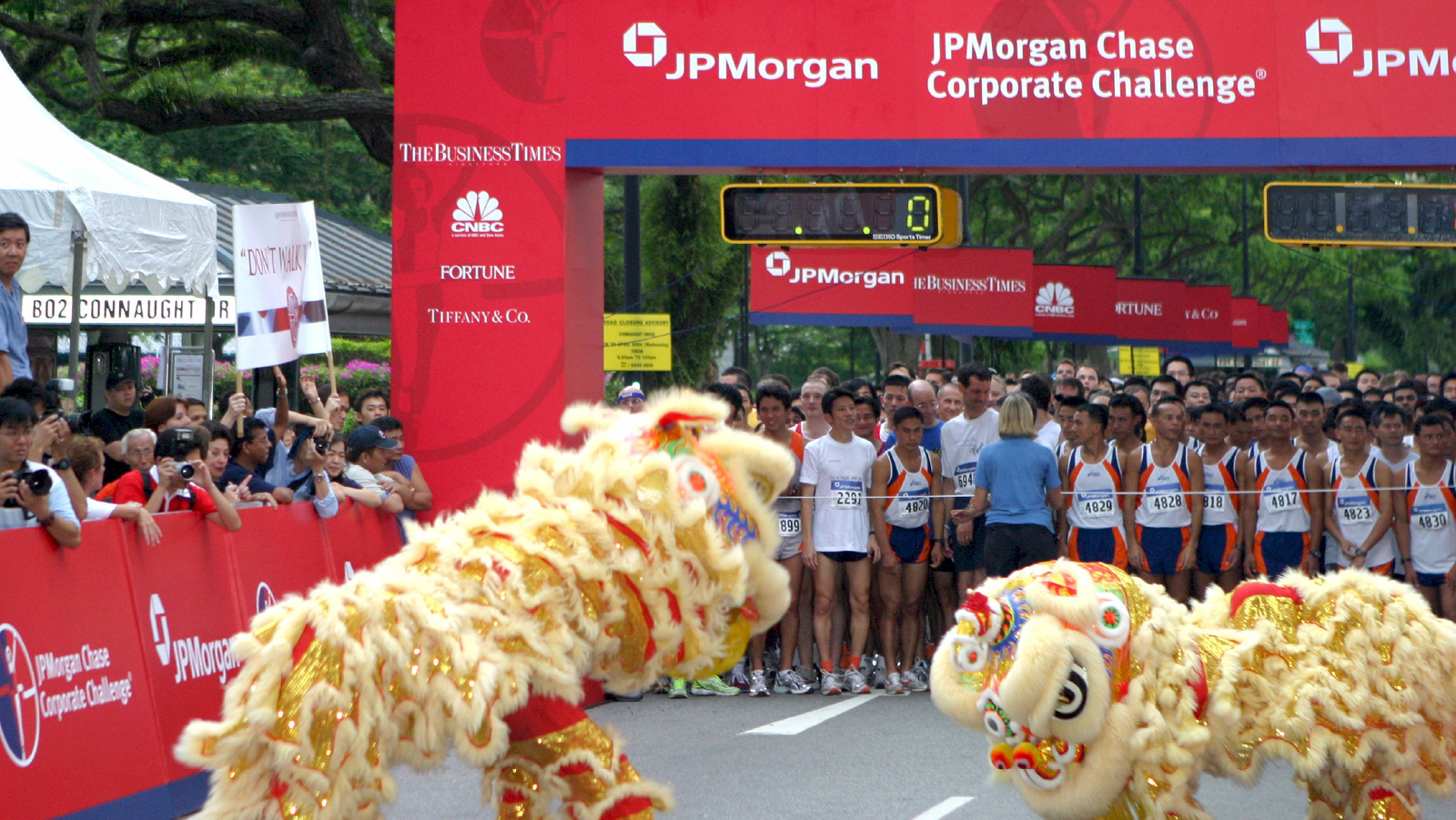 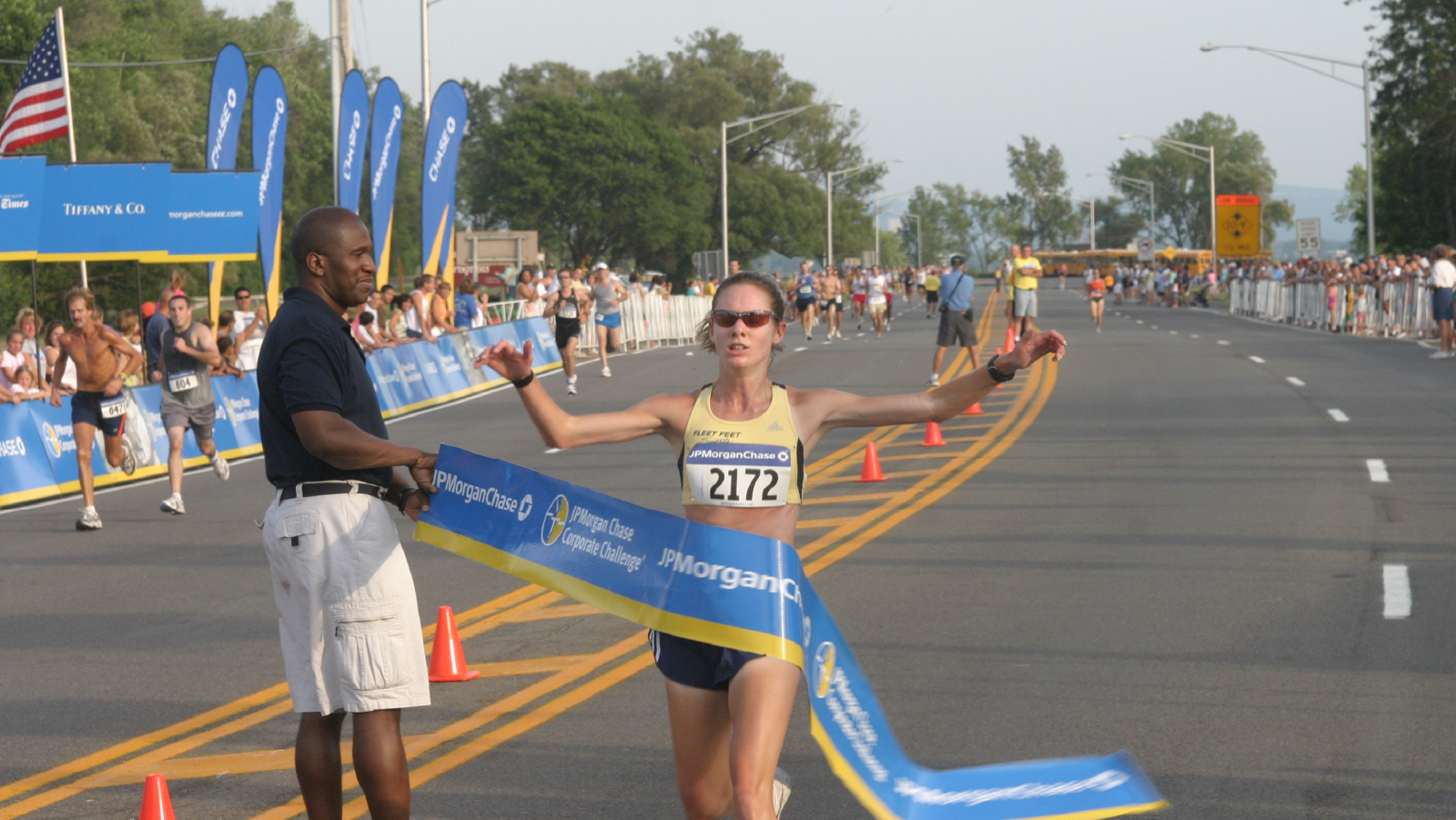 3.5 miles open to everyone

When the Corporate Challenge was founded in 1977, leadership at the firm strove to create a race distance and environment that would be welcoming to all participants – regardless of skill level, gender or age.

A tangible example of this was achieved in 2005 when, for the first time in Series history, the Corporate Challenge attracted more women to the starting line than men. This spirit of inclusivity continues to persist, with 2022 being the first year the Series will provide participants the opportunity to register as non-binary. 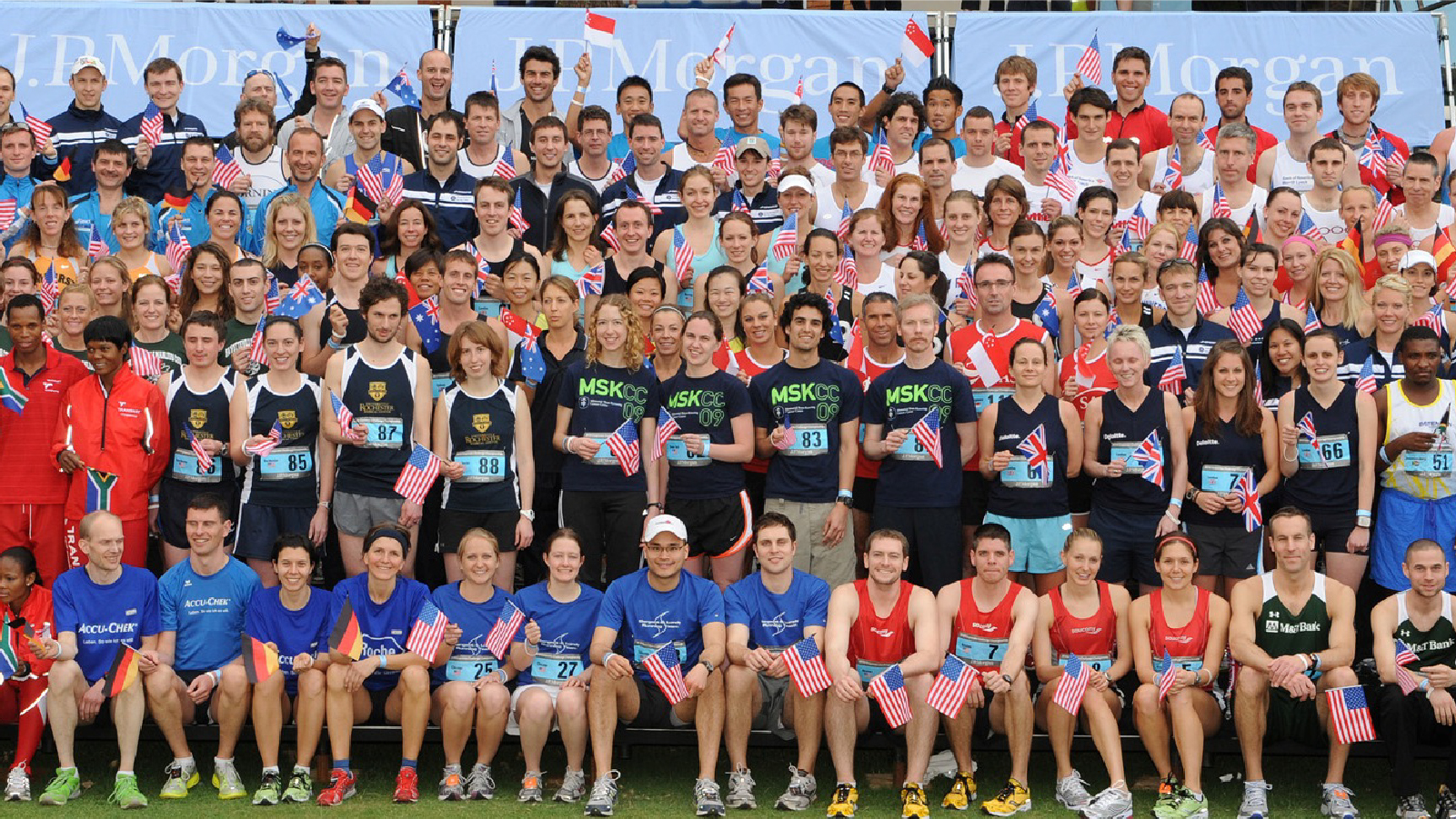 The Championship adopts an Olympic style

Since 1983, the unifying event of the Corporate Challenge has been its Championship event, featuring the fittest companies from every city in the Series. And, until 2008, it had been held every year in metropolitan New York.

That changed in 2010 when the Series adopted an “Olympic style” with The Championship, rotating it globally. Johannesburg was given the honor to host the first Championship in this fashion, with 144 of the fastest full-time runners in the world eagerly accepting the invitation to compete. Transnet Rail Engineering, representing the host city, won the men’s and women’s titles that year, with San Francisco’s General Electric earning the mixed crown.

The firm’s 90th year of doing business in China was commemorated by the Corporate Challenge’s first-ever visit. 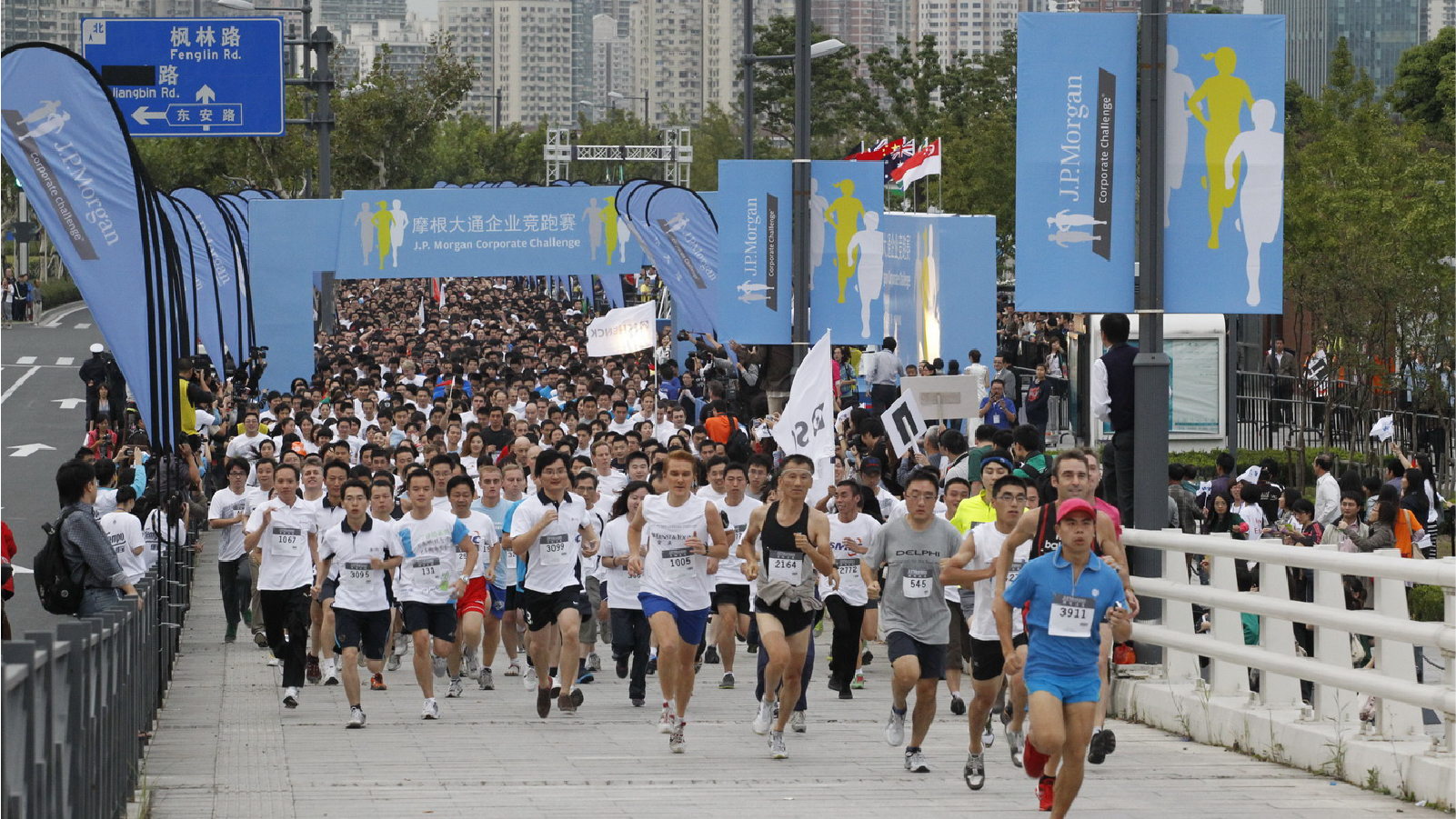 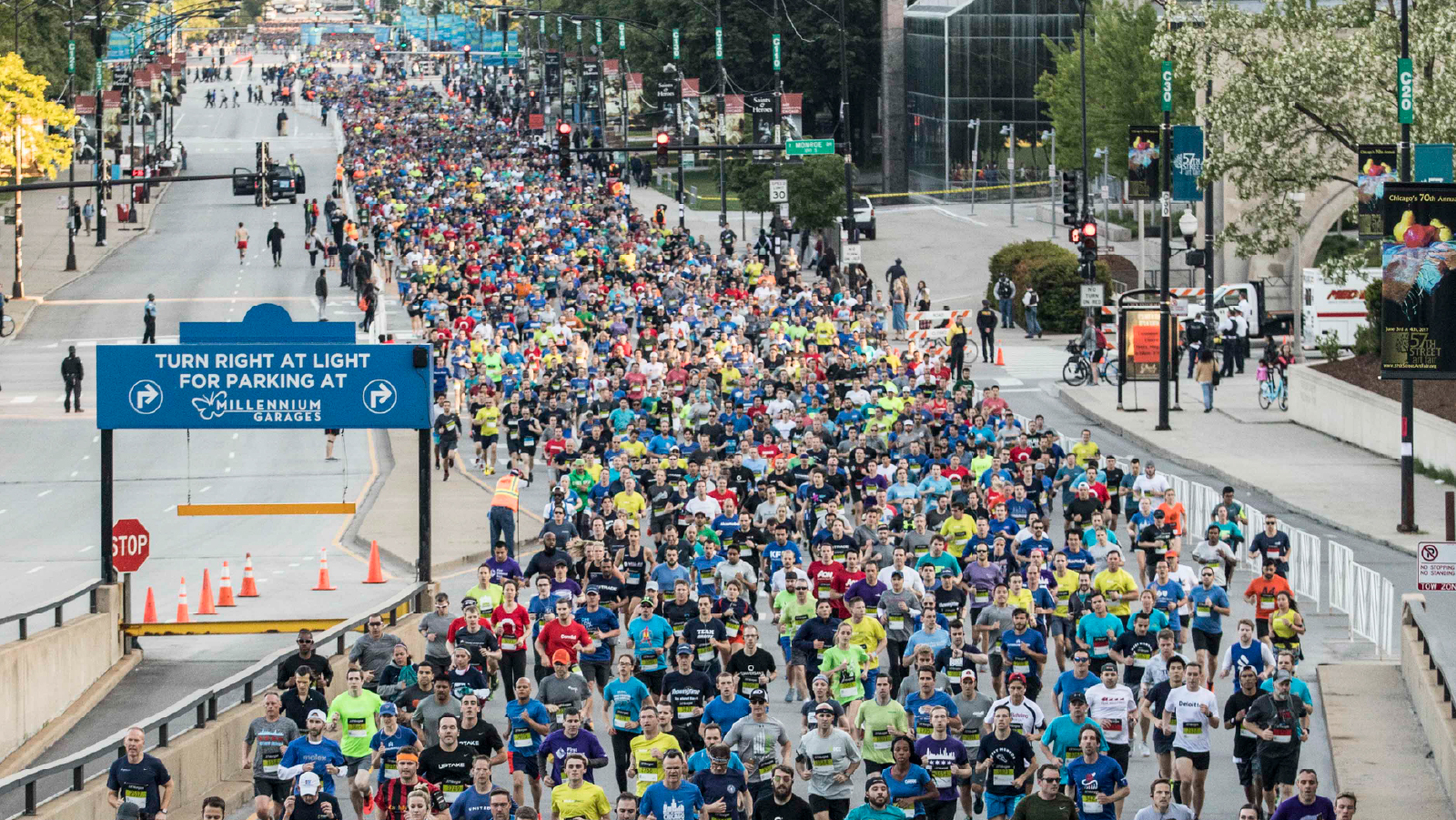 By 2019, the popularity in Chicago had reached unprecedented levels. The crowd of 28,309 participants from 687 companies on May 23 that year is the largest U.S. single-night race in Corporate Challenge history. JPMorgan Chase illustrated its hands (and training shoes) on approach to the event, registering 2,361 employees, breaking the firm-wide record for entries in a single event. 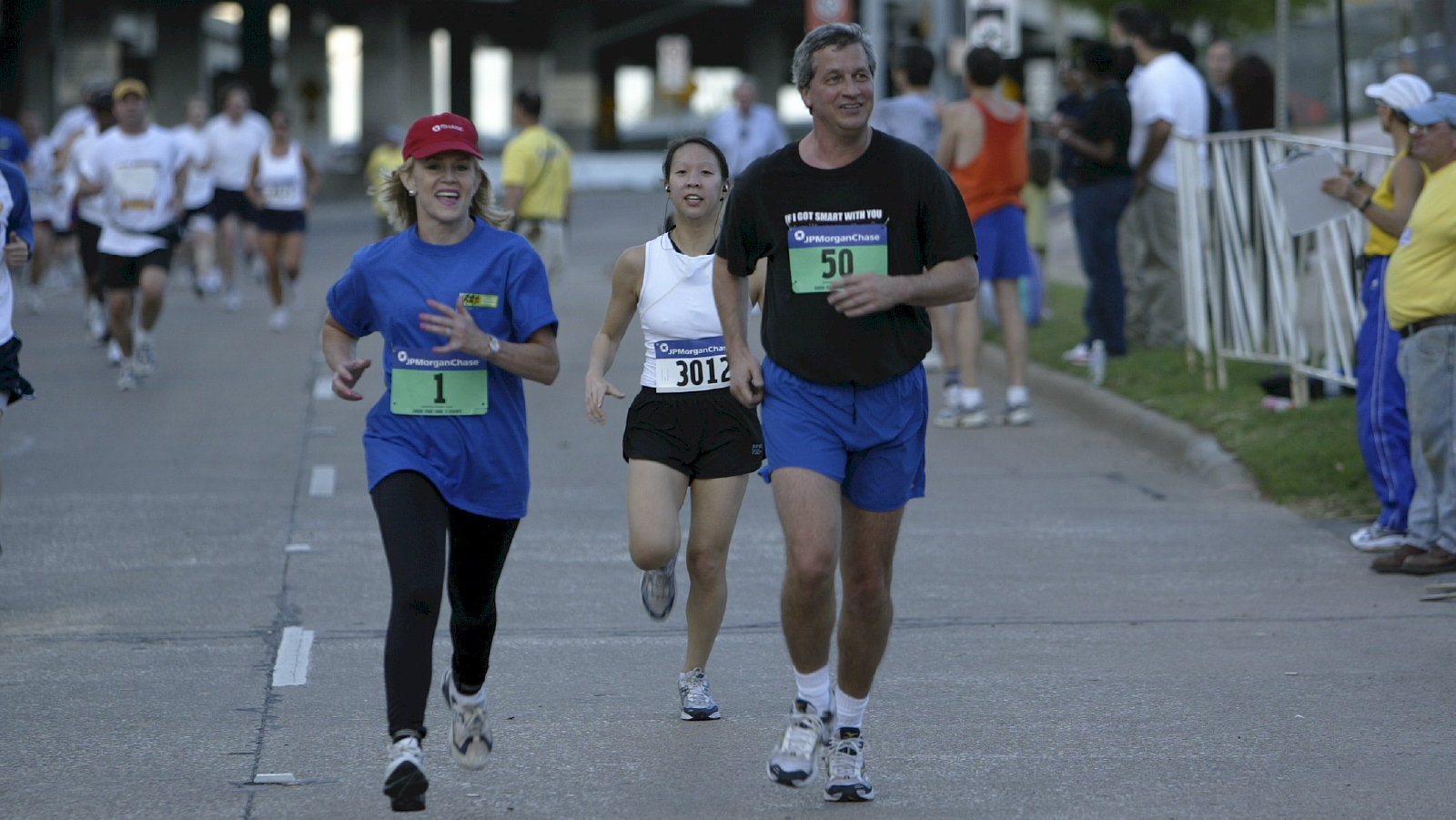 For the 44th year of the Series in 2020, the Corporate Challenge planned a three-location expansion to Buenos Aires, Dallas Ft. Worth and Philadelphia.

For Dallas (most recently 2004, pictured) and Philadelphia (1998), it meant a reunion with the Corporate Challenge. For Buenos Aires, it meant the Series’ first venture into South America, giving it a presence in all six inhabited continents.

Though the COVID-19 pandemic curtailed in-person Corporate Challenge racing in both 2020 and 2021, the Series persevered by providing a complimentary virtual opportunity.

Corporate Challenge veterans and newcomers jumped at the opportunity. A total of 107,610 participants from 3,343 companies and 94 countries entered. It wasn’t quite like 12,000 taking off from the Buffalo Delaware Park starting line (pictured), but it delivered a hint of normality. 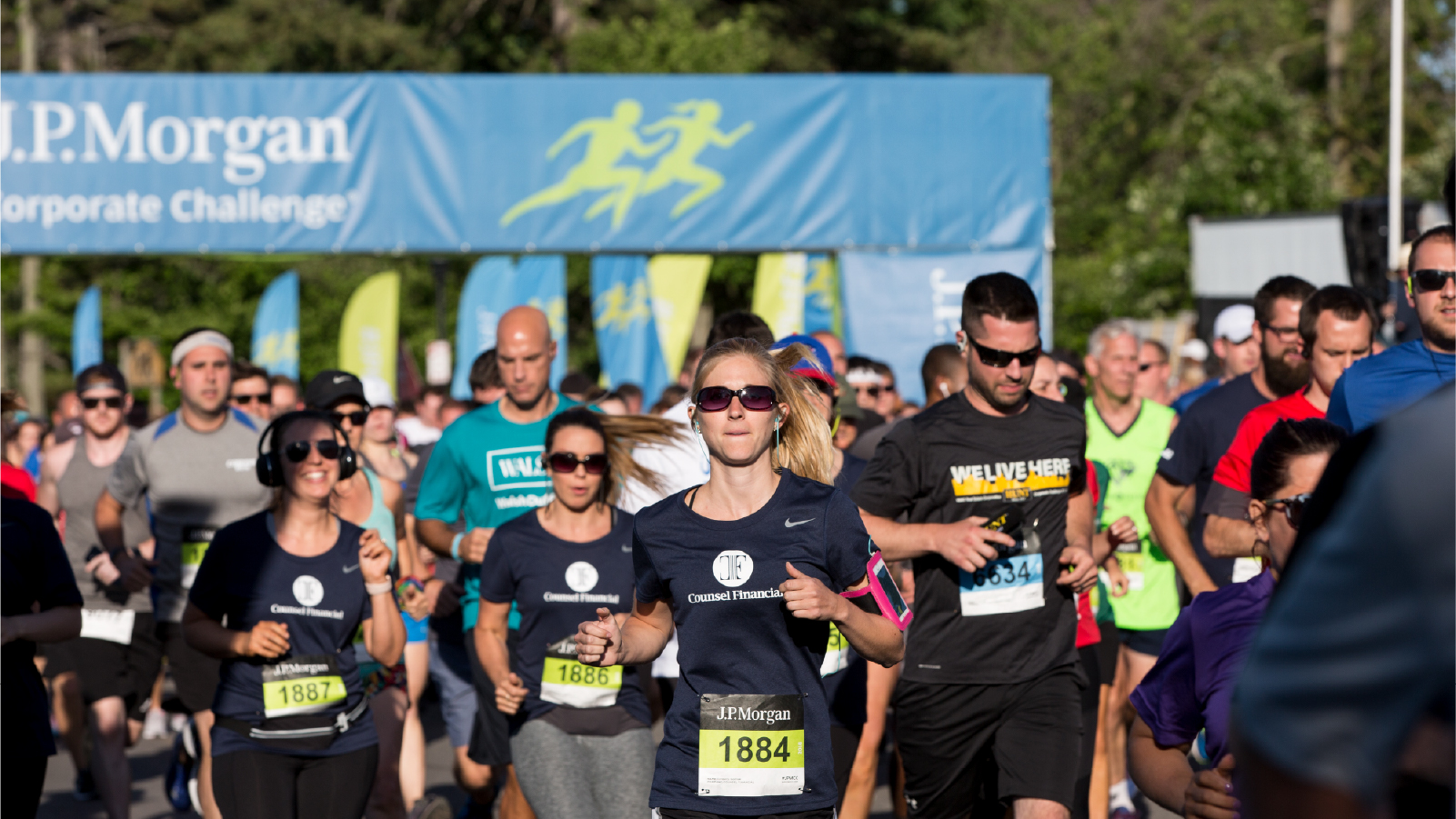 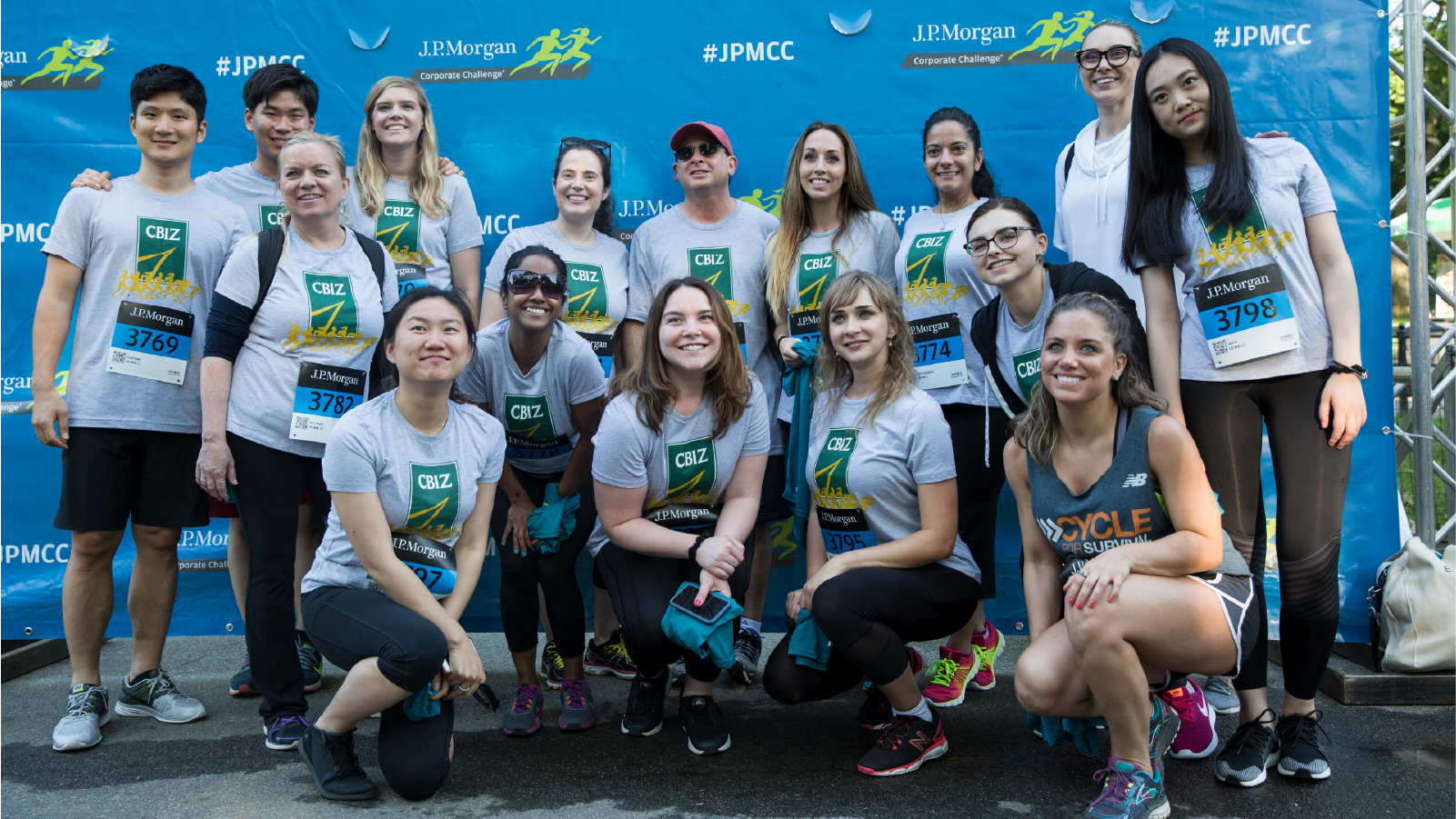 Return in the works

After an absence of more than two years, the J.P. Morgan Corporate Challenge Series is set to return to all 15 of its locations in eight countries in 2022. It will mark the 46th consecutive year of Series ownership and operation.