A champion proudly leads employer back to Corporate Challenge London

A four-time women’s champion at the J.P. Morgan Corporate Challenge London, Lara Bromilow missed the competitive spirit of the event while it was sidelined by the COVID-19 pandemic.

As a team captain, she missed it even more.

“There’s always a buzz in the HSBC office leading up to the J.P. Morgan Corporate Challenge, with so many people talking about what they hope to do and telling stories about what happened in previous years,” Bromilow said.

What happened in 2020 and 2021 was a Virtual Corporate Challenge. Participants around the globe had the option to do their own thing while the event took a sensible break due to COVID, and more than 100,000 registered.

But even the fastest Virtual racer would say there’s nothing like the real thing, and the celebration of normalcy was back on these two nights in London as 19,672 entrants from 619 companies ventured to Battersea Park on the banks of the River Thames for the first UK in-person Corporate Challenge since July 4, 2019.

Through all that success, Bromilow noted she took equal pride in being out on the 3.5-mile (5.6km) Battersea course with her teammates, many of whom are competing in their only road race of the year.

“The reasons that people at HSBC run the Corporate Challenge is so varied,” Bromilow said. “There are some hoping to be in the winning team, those with a personal goal to beat, rivalries between colleagues, and plenty with completion being the challenge.”

“Everyone comes together on the night in a sea of red HSBC t-shirts and the camaraderie is fantastic,” she continued. “Especially post-race, when the endorphins are flowing, and everyone is catching up over food and drink. All this has been missed the past two years, so it is great to see everyone and experience that atmosphere again.”

The fastest on the two nights were Timothy Lefroy of Baringa Partners, the Wednesday’s night men’s winner, and Lucy Reid of J.P. Morgan, the women’s champion on Thursday. Lefroy broke the tape in 16:34 (4:44 mile pace) and Reid crossed in 18:39 (5:20). They are now the two fastest winning times in the entire 2022 J.P. Morgan Corporate Challenge Series.

Chris Thomas of Shell International Petroleum Company was the first-place men’s competitor on Thursday night in a time of 17:10 (4:54 mile pace). Nina Kraus, representing Hamilton Lane, earned women’s top honors on Wednesday in 19:54 (5:41). The winners topped a total of 9,746 entrants on Wednesday and 9,926 on Thursday.

The J.P. Morgan Corporate Challenge London took another positive stride forward this year by adding a third category of individual finishers. For the first time, employees from all companies could register as non-binary and those specific entrants are listed in the Series Leaderboard and are eligible to score in their company’s mixed team results.

All the entrants were celebrated by the JPMorgan Chase Foundation, who donated in their honor to NSPCC, the UK’s leading children’s charity. The NSPCC strives to end child abuse, protect children who are suffering today, and prevent abuse from happening tomorrow. Between 2016-21, NSPCC has helped make 6.6 million children safer from abuse.

A philanthropic spirit, along with a thirst for in-person camaraderie, is what brought multinational financial services company Societe Generale to Battersea Park.

“After two years of running virtually, this was a welcome return to in-person activities,” said Lianne Earle, team captain for Societe Generale. “It’s a greatly anticipated event for 250 registered staff who enjoy socializing with colleagues and the exercise it offers. It’s also a great way for us to fundraise for our main charity partner Shelter.”

Schroders Investment has long fielded a Corporate Challenge team in London, and team captain Hannah Grant could feel the excitement for the event when registration opened this year.

“It brings a lot of positivity to the workplace and something nice for employees to look forward to,” Grant, who registered 111 Schroders colleagues, said.

The 2022 J.P. Morgan Corporate Challenge Series has now passed the halfway mark – with eight cities of a scheduled 15 in the books. The remainder of the year will include three expansion markets – Philadelphia (October 6), Dallas-Fort Worth (October 19), and Buenos Aires (November 3). Now in its 46th year, including two years of Virtual racing due to COVID, the Corporate Challenge is ready to spread its appeal wider than ever before.

San Francisco is next up for the Series, with the Bay Area’s 36th running scheduled for Tuesday, September 20, with post-race entertainment at the Chase Center, home of the NBA Champion Golden State Warriors.

Longest-running overseas event roars into its fifth decade of success 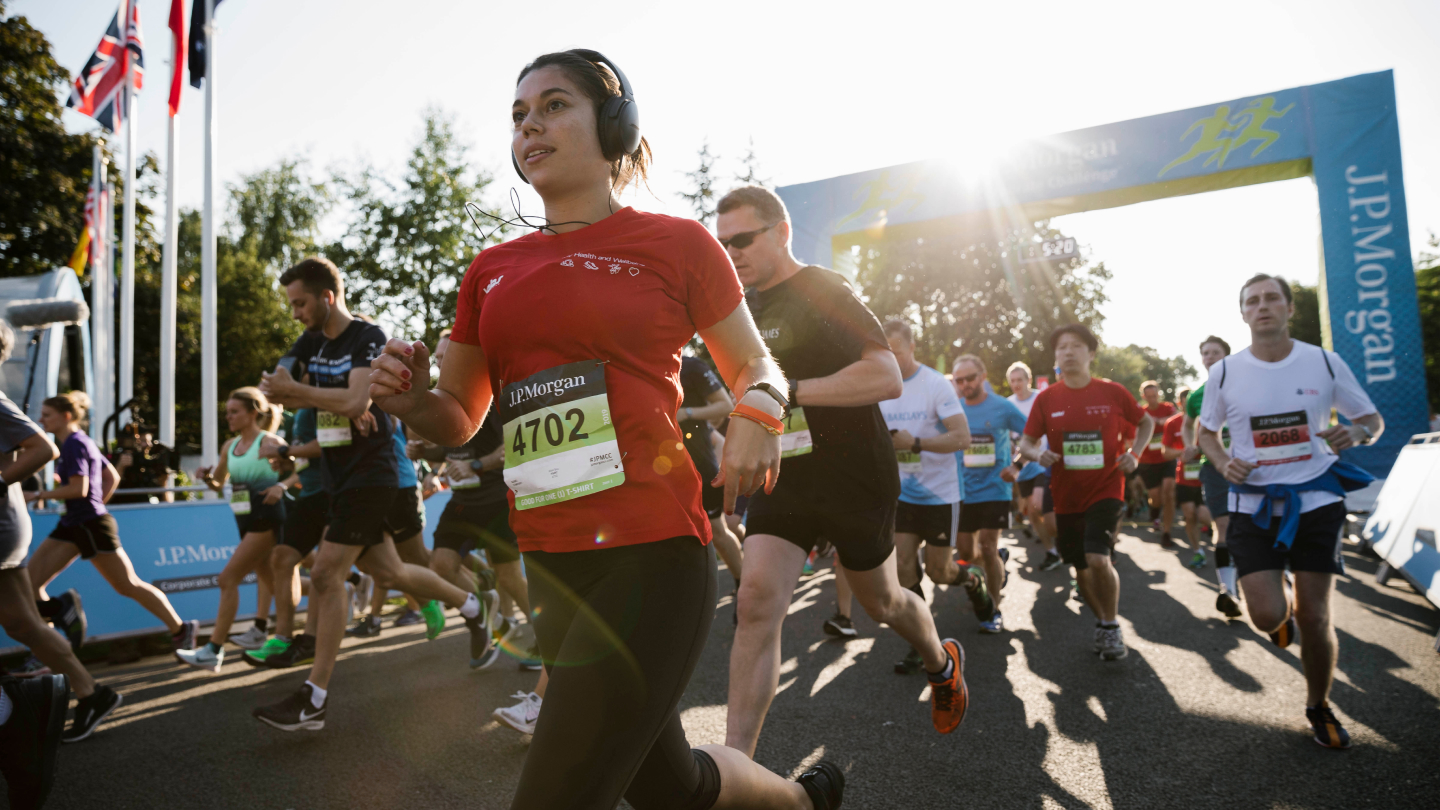